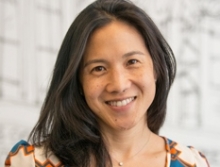 Dr. Angela Lee Duckworth is professor of psychology at the University of Pennsylvania. Angela studies non-IQ competencies, including self-control and grit, which predict success both academically and professionally. Her research populations have included West Point cadets, National Spelling Bee finalists, novice teachers, salespeople, and students. Angela received a B.A. in Neurobiology from Harvard in 1992 and, as a Marshall Scholar, a Masters in Neuroscience from Oxford.

She completed her Ph.D. in psychology at the University of Pennsylvania. Prior to her career in research, Angela founded a non-profit summer school for underserved children which won the Better Government Award for the state of Massachusetts and was profiled as a Harvard Kennedy School case study. Angela has also been a McKinsey management consultant and, for five years, a math teacher in the public schools of San Francisco, Philadelphia, and New York City. In 2013, Angela was selected as a MacArthur Fellow.

Book: Grit: The Power of Passion and Perseverance